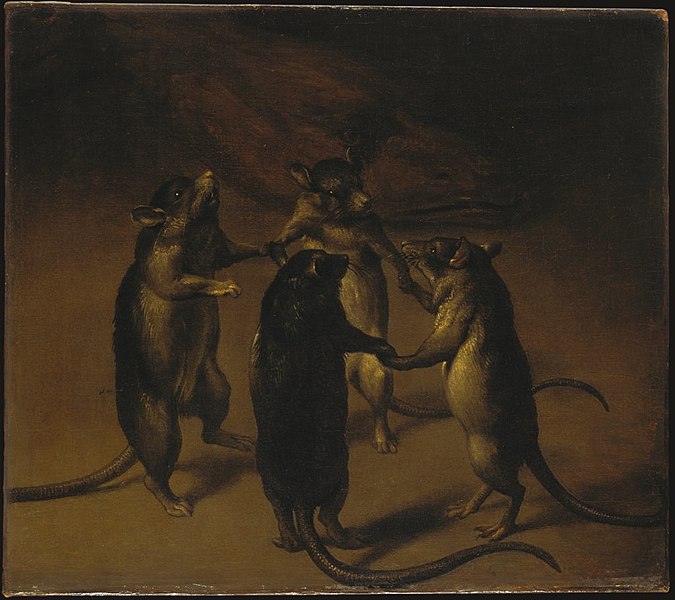 I have never liked halflings or their equivalent races. I tend to prefer my games slightly more on the serious and grim or even sometimes heroic side rather than be lighthearted, and halflings have always felt a little silly to me. When I was running dwimmermount, I experimented with replacing halflings with goblins, like James Malzwoski of Grognardia. (He is the original creator of the Dwimmermount campaign). In my more recent games I’ve replaced Goblins with Ratlings, partly inspired by one of my favorite supplements, Paul’s Dungeon Master Notebook (from Paul Hughes of blogofholding.com).

In the style of ACKS, I run all of my Demi-Humans with multiple classes they can select from and the normal class that fills the same role as the Halfling class of B/X is the Ratling Nightblade (being essentially a Fighter/Thief), which I’ll show in a future post at some point. However, what I actually want to show today is the working draft of the Ratling Packmaster (inspired partly by this post and partly by Clan Moulder of the Skaven from Warhammer Fantasy). This class was loosely built using the rules in the ACKS Player’s Companion as a guideline.

Description: A Ratling Packmaster can call forth and control rats as well as create mutant rats, rat ogres, and other abominations at higher levels.

Ratling Packmasters have the same HD, saving throws, fighting capability, armor and weapon restrictions as a Thief (including backstab). They have the same XP progression as a Cleric. Ratling Packmasters can use Climb Sheer Surfaces, Hide in Shadows, Move Silently, and Hear Noises as a Thief of the same level (with the same demi-human modifications as a Halfling if your system uses them.) If you are using different Thief skills (LotFP for example), Packmasters have ½ the number of skills a Thief normally has and ½ the skill points.

Ratling Packmasters also have abilities that allow them to call forth and control rat swarms and giant rats from the surrounding areas. However, they may only ever control one swarm of rats at a time. All rats, giant rats, mutant rats and rat-monster creations have a 5% chance to spread disease when they inflict damage upon an enemy.


Speak with Rats: Rats and Giant Rats called by the Packmaster’s abilities can be directed as the Packmaster wishes (including scouting), but they are not very intelligent.

Mutant Rat Familiar: This familiar has ½ the HP of the Packmaster and deals 1d6 damage. Like all rats the Packmaster creates or calls, it has a 5% chance of inflicting disease when it deals damage to an enemy.

Call Rats: The Packmaster calls forth a small 1 HD Rat Swarm. This takes 1 exploration turn. This swarm deals 1d3 damage when it attacks. This ability can also be used to “Heal” any swarm of rats 1d6+1 HP (which still takes an exploration turn).

Call Rat Swarm (3/day): The Packmaster calls forth a Rat Swarm with HD equal to the Packmaster’s level. This takes 1 exploration turn. This swarm has 1 attack (1d6) per 2 HD.

Call Giant Rats: The Packmaster calls forth one giant rat per level of the Packmaster. This takes 1 exploration turn.