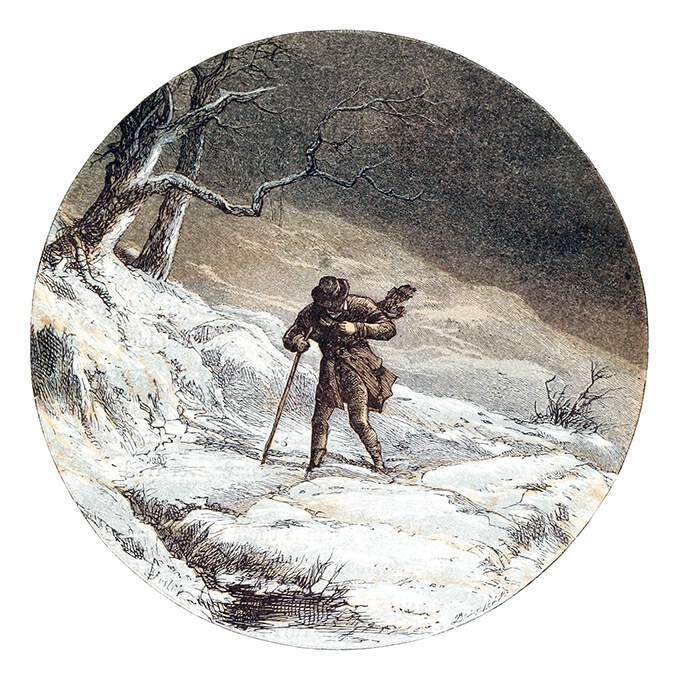 Today I have the next article in my series examining my house rule supplements. I’ll be going over my Overland Travel rules and the consequences those rules create during play. I have quite a lot of ground to cover with this supplement so I’ll be splitting it up into multiple parts.

There are a lot of great modifications to the standard overland travel rules out there, most coming from B/X as a base. I’m going to specifically call out this post from Simulacrum that I consider to be the gold standard, especially in terms of presentation and ease of use. For the most part, my version of the rules is pretty similar to all the others in the OSR community. There are, however, four main departures:

We’ll start off with status effects. While old school D&D has a heavy emphasis on resource management, it almost completely lacks any consequences to running out of resources. In B/X what happens if you run out of food or water? What happens if you go without sleep? It’s easy enough to create rulings to answer these questions, but I wanted to standardize the effects. This should make it easier for players to track and understand them and also make overland travel more interesting. My main design goal was to create a simple and easy to understand system that nonetheless drives player choice. I didn’t want to use HP damage because I wanted a system that remains engaging as characters increase in level.

Weakness is the biggest innovation in these rules. There is precedent in B/X for weakness to give -1 to hit and damage. This is the penalty if you don’t rest once every 6 turns in the dungeon or once every 6 days in the wilderness. While I actually ignore this rule in play, I like the size of this penalty, but find the actual effect relatively boring. For my rule I have instead opted to go with a fumble on a 1 or 2 when attacking which I consider a pretty comparable penalty. (Credit to Paul Hughes of Blog of Holding in his excellent DM’s Notebook for this idea.) For the actual fumble chart itself (see above) I pared down and modified this chart from Ten Foot Polemic to make it work in my game.

However, these rules for weakness have only a marginal effect on spellcasters, so I’ve added a 50% spell failure chance (as fighting classes make attacks more often than spellcasters cast spells). This adds a real penalty that drives players to have to make difficult choices, particularly when deciding whether spellcasters should recover spells or get a full night’s sleep. It also means that when clerics are weak they can’t necessarily rely on having healing, which affects the entire party.

Once I had a good rule for weakness, it was relatively easy to slot it in as the first effect whenever something goes wrong. Whether it’s fatigue, hunger, thirst or exposure, they all cause weakness at first. While not strictly necessary, I also wanted to have additional penalties before characters just outright die. Again looking at B/X, we see the precedent for exhaustion is -2 to hit, damage, and AC. However, I didn’t like the idea of just stacking additional penalties of the same type, especially when they affect combat classes significantly more. I decided instead to go with ½ Max HP, which is extremely simple to understand, simple for players to track, and works equally well no matter what class a character is.

Obviously, the final status effect from many sources should be death. However some sources (like fatigue) can’t actually kill you, so instead I decided to go with a reduction to 1 Max HP in these cases.

I’ve play-tested these rules pretty thoroughly, and I like the way they feel in play. I think I’ve achieved a relatively simple way of bypassing HP damage to create lasting effects on characters that are both meaningful and easy to track. If you want to implement these rules and you really hate weakness, you can feel free to replace it with -1 to hit and damage, but I strongly recommend that you keep at least some chance of spell failure (even if it’s only 25% or 10%). In play I’ve found 50% to work quite well.

Next post I’ll be going over Weather and I’ll show how I use these status effects with those rules.